A Free Day Of Fun, Imagination and Discovery 13 May 2017, celebrated the 50 year anniversary of the University of Surrey. The event attracted thousands of people interested in show-and-tell science, from all across the south of England. The research team operated a full-day demonstration of HomeSense field trial technology, titled: “Making sense of the 21st century household”. This opportunity to engage a public audience in playing around with the sensor suite, observing and discussing with them what the sensors capture, resulted in recruitment of a number of households. 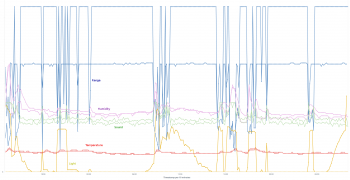 There is growing interest in digital sensors for observing social life, and for supplementing social science research methods — drawing on developments in fixed, mobile and wearable sensors as part of the new-emerging Internet of Things (IoT).

This project is investigating the availability of sensors for social research, their usability and usefulness for a variety of research settings. It develops resources for training courses in the methodological, technical and ethical aspects with the National Centre for Research Methods (NCRM), and shares experiences from the HomeSense field trial in volunteer households, conducted by the Centre for Research in Social Simulation (CRESS) and the 5G Innovation Centre at University of Surrey.

The project is funded by the ESRC.